The Raspberry Pi and the Arduino can be used as „toys“ for students of information systems in order to gain initial access to programming or, in the higher semesters, an introduction to topics such as the Internet of Things (IoT), smart home and smart factory , Even lower-threshold could succeed with the CALLIOPE mini, which manages for the first experiments without additional materials. The CALLIOPE mini was developed for third grade primary classes and is a bit playful. After all, he can be used as a „voltage estimator“. First, it describes how the CALLIOPE mini fits into gamification concepts. Then the concrete structure will be described. A youtube video shows the „CALLIOPE in action“:

CALLIOPE mini is a gadget for the player types „Explorer“ and „Socializer“.

The CALLIOPE mini has sensors and an LED matrix on board, which can be put into operation very easily and quickly. This invites to experiment and „explore“, the player type „Explorer“ should thereby be addressed (Bartle 1996). In the coming semesters, the CALLIOPE mini will be used as an alternative to or in combination with Raspberry Pi and Arduino in small group projects (university teaching). The last few semesters showed that especially in the „gadget-oriented“ projects, an intensive project team structure quickly became established. With the CALLIOPE mini, which has a much more emotional appeal than an Arduino and also appeals to students with a lower technical performance expectancy, the type of player „Socializer“ should be addressed.

The playful handling of programming should increase the time-on task (Anderson). The quick success with the CALLIOPE mini should also increase the motivation to deal with programming (Deci & Ryan 2000, Brell 2017).

How does it work?

The CALLIOPE mini has five large, easily accessible contacts, two of which can be used as analogue inputs. Likewise, the CALLIOPE mini provides a voltage of about 3.2 volts via the contacts. From this, a potentiometer can be used to obtain a voltage that can be set between 0 Volt and 3.2 Volt, which in turn serves as a signal to be measured for the analog input (Figure 1). This is sufficient for a first experiment, many applications can be deduced in which the potentiometer is replaced by e.g. a LDR with fixed resistor combination or a strain gauge is replaced. The voltage measured with the analog input is visualized via the built-in LED matrix. For this purpose, the first two rows are used, the more LED lights, the higher the measured voltage. 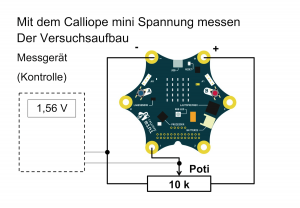 The CALLIOPE mini can be programmed with three different programming languages ​​via an online editor via calliope.cc. The finished program code is simply downloaded and copied to the CALLIOPE mini connected via USB. This is where the graphical programming environment comes in. Figure 2 shows the source code generated with it. 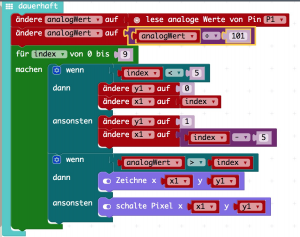 Figure 2: The source code of the program.

The program is very simple. In an infinite loop, a voltage value of P1 is first read and stored in a variable analog value. analogValue is divided by 101, since P1 provides values ​​from 0 to 1024 corresponding to 0 volts to 3.2 volts and only values ​​from 0 to 10 are needed for the display.