Do exams have to hurt? Yes, maybe, because the ability to suffer is a top soft skill as well as diligence. But does an exam have to scare me? No, because fear is a very bad learning companion. With the well-aimed didactic instrument of the „wanted cheat sheet“ as shown in Fig. 1, it is possible to take fear out of the exam situation, to reduce the unwanted behaviour of learning only hours before the exam and, last but not least, to reduce the number of diarrhea. Pleasant side effect: Even months after the exam, essential content is still known bei students. 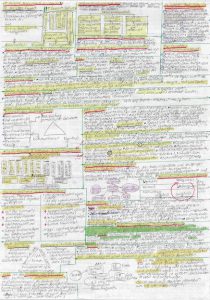 The trigger for the introduction of the cheat sheet in the winter 2012 was my statistics lecture, the most hated subject for business administration students. The students were offered to take a handwritten DIN A-5 cheat sheet in the exam. Initially, the instrument was hesitantly accepted, as the studies quickly realized that it is work to gradually compress all my slides to a twice DIN A 5 paper. The activation rate was initially below my expectations. That writing and condensing the material (a study is constantly forced to decide what is important and what is not) memorizes a lot and deals critically with the substance, some only believes after the exam. Only bonus bonus points, which were added for cheat sheets to the exam points, brought the breakthrough. Today almost all my studies produce very nice and helpful cheat sheets.

Outcome. After three periods of teaching, a reduction in the number of diarrhea in statistics from 43% to 11%. And each semester to correct nearly 30 repetitions less. That saves my time.

In the meantime I have transferred the concept to all my lessons (programming, business informatics methods …). Success has gotten around and the extra points are no longer required. More than 2500 artistically designed cheat sheets can be viewed at the Niederrhein University of Applied Sciences.

Thats how it works. The mechanism of action of the game is based on two cornerstones:

Sad faces are seen sometimes after the exam: The deal is that the cheat sheet is delivered to me.

Didactic concept. Behind the cheat campaign is a widely accepted in didactics mechanism of action, the time-on task (Anderson 1986). Time-on-task refers to the effective amount of time a learner focuses on the subject matter. The research consistently provides the result that a higher time-on task implies greater learning success. Those who practice longer and more will master a learning object better than someone who does not. My motto for the students: „Tennis is not learned by reading tennis books, but by going to the court and beating the ball – often and regularly“.